What can a writer-in-residence expect during a sojourn at the A-frame?

Let's start with the "ghost." Many of the more than 30 writers who've crossed the threshold talked about the spirit of the place and how it seemed constantly present and motivating.

"It was difficult to sit in such a way that I wasn't facing him [Al Purdy]," wrote Ben Ladouceur. "Even lying down didn't work; he had built the roof over my head."

Initially, Kath MacLean felt Al poking about. "When I first arrived ... I heard him and felt him helping and encouraging me. Soon, however, he left me alone to do my own thing."

Maria Sabaye Moghaddam wrote of "a sense of his presence in the house, a spirit watching over me ..."

James Arthur doesn't believe in ghosts but found himself thinking about Al all the time he was there. Mark Jacquemain "talked to the ghost" – mostly to apologize, presumably for being unworthy or undeserving.

Of course, there is no ghost inhabiting the A-frame. Their testimony simply speaks to Al's accomplishments and to the literary heritage the A-frame has become.

"I was like Goldilocks in the three bears' house and the bear could return at any moment, " wrote Doug Paisley.

Laurie D. Graham described how it felt being surrounded by Al's possessions: "I was alone for stretches of my time there, but very rarely did I feel lonely," she wrote. "I'm living in the past here, an acknowledged past that I can touch and hear. It's better than any museum." 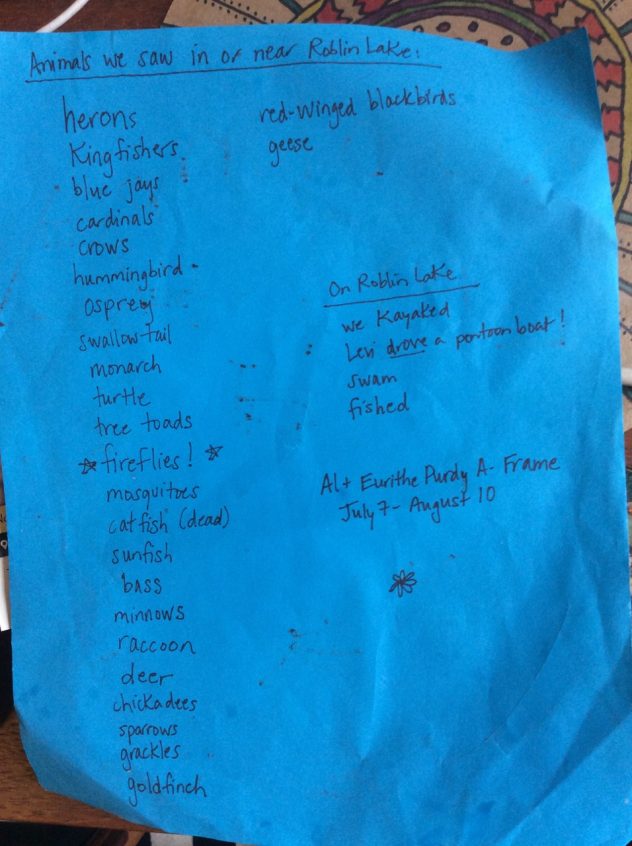 Another overwhelming impact on residents – most hailing from urban environments – is the quiet surroundings and the abundance of wildlife. Otters, ducks, herons, loons are daily visitors. Sarah Dearing talks about how the "freckin" beavers attack trees on the shoreline. Cormorants, goslings, a barred owl – and even mosquitoes – are described as larger than life.

On a very practical level (make a list, folks), the house is fully equipped with bed and bath linens and kitchen utensils.

But an automobile is definitely an advantage. Ben Ladouceur said he learned to drive so as not to die of starvation! There are no grocery stores, convenience stores or restaurants in Ameliasburgh. The closest supermarket is 16 km away in Belleville. In the County itself, Wellington is 18 km away and Picton is 28 km.

But with auto at hand, there is an amazing variety of sights to see within a 50-km drive from the A-frame.

In the County, there are the picture-postcard beaches of Sandbanks Provincial Park, and the spectacular Lake on the Mountain, from which you can look down on the Glenora ferry hundreds of feet below as it crosses the Adolphus Reach of Lake Ontario.

Picton, Bloomfield and Wellington are filled with bistros, antique shops, emporiums and boutiques, all catering to the seasonal influx of tourists. The southern rim of the County is dotted with wineries. Venture 50 km north of the A-frame and you'll find yourself crossing Highway 7 on the edge of the Canadian shield and into the hardscrabble terrain described in Al Purdy's "The Country North of Belleville."

Having a car is ideal, but there are other ways to manage. Emily McGiffin rented a vehicle, stocked up, then did the rest of her residency on a bike. Others did, too. One writer had her partner arrive every weekend with food and supplies.

And there's plenty to do on foot, also. Nicholas Bradley and others appreciated the unpaved byways, quiet main roads and farmers' fields perfect for walking and running. The Al Purdy Library is just a kilometre away, and has a large display of Purdy memorabilia. Another kilometre along the main village road is Purdy Lane, leading to the poet's gravesite. In the centre of town is the excellent Ameliasburgh Heritage Village.

Back at the A-frame, visitors left a few tips:

—Be prepared for Purdy Pilgrims, coming to visit and photograph the literary landmark;

—Leave a few staples in the cupboard for those arriving who may not be aware of the lack of food supplies in the village (a can of beans, or a can of tomatoes and some pasta);

—If allergic to wasps or other insect bites, carry an EpiPen;

But mostly, the stay at the A-frame is described as a quiet and serene setting conducive to creativity. Katherine Leyton, the inaugural writer-in-residence, spent time reading Al's books and listening to his records. It inspired her to write, and she credited her stay with launching her career.

Contemplation and reflection is a natural activity at the A-frame. "I spent a lot of time thinking about inhabiting a creative space that had been inhabited very differently before my short time there," said Andrea Bennett of the residency program.

The A-frame is a special place, "a destination for many people back in the day and I'm glad it still is," said Doug Paisley.

Maria Sabaye Moghaddam wrote that the residency "makes it possible for Al Purdy to continue to contribute to Canadian literature."

Finally, as wrote Nick Thran and Sue Sinclair, who shared a residency: "This place casts a spell. Give yourself to it."