January 21, 2014For immediate release
AMELIASBURGH, Ont. – Seven Canadian writers have been chosen for the first working retreats at the Al Purdy A-frame house in Prince Edward County. They were chosen from dozens of submissions.
The seven are Katherine Leyton, Sue Sinclair, Nick Thran, Kath MacLean, Laurie Graham, Rob Taylor and Helen Guri.
“I’m so excited about the projects,” said Jean Baird, president of the Al Purdy A-frame Association. “The first writer-in-residence will be in the house by July.”
The A-frame house was built on Roblin Lake in 1957 by the late Al Purdy, one of Canada’s greatest poets, and his wife, Eurithe. Thanks to the generosity of Eurithe Purdy and donors from across Canada, the A-frame was acquired in 2012 by the Al Purdy A-frame Association, a national non-profit organization with a mandate to promote Canadian literature and to preserve the home as a retreat for future generations of Canadian writers.
The A-frame, a cottage beside Roblin Lake, was the centre of Purdy’s writing universe and a crossroads on Canada’s literary map. In their 43 years there, the Purdys hosted a who’s who of Canadian authors: Margaret Laurence, Milton Acorn, H.R. Percy, Michael Ondaatje and hundreds of others.
The Al Purdy A-frame Association gratefully acknowledges the generosity of all donors to the project. They are crucial to the success of this effort.
Special thanks are extended to major donors ($5,000 to $40,000): The Glasswaters Foundation, The Good Foundation, Avie Bennett, The Metcalf Foundation, George Galt, The Chawkers Foundation, Michael Audain, Jeff Mooney and Suzanne Bolton, Leonard Cohen, Rosemary Tannock, Tom and Helen Galt, The Griffin Foundation, Harbour Publishing, and Yosef Wosk.
For a full list of donors, go to www.alpurdy.ca.
Fundraising efforts continue and are critical to the success of the writer-in-residence program. Online donations are being accepted through PayPal at alpurdy.ca, or cheques may be sent to The Al Purdy A-frame Association, 4403 West 11th Ave., Vancouver, B.C. V6R 2M2.
For further information:Steven Heighton: 613-546-9677Jean Baird: jeanbaird@shaw.ca
Biographies of the writers-in-residence are found below.

Katherine Leyton lives in Toronto. Her work has been published in various reviews and newspapers, including The Edinburgh Review, The Malahat Review and The Globe and Mail. She is the founder of HowPedestrian.ca, a video poetry blog. In addition to working on her own writing at the A-frame, Katherine plans to travel in the region and through her blog promote the poetry of Al Purdy and other local poets.
Sue Sinclair is a highly acclaimed poet and novelist living in Montreal. Among her published works are four books of poetry and three novels. Sue is completing a PhD in philosophy, and at the A-frame will work on a series of poems investigating theories of beauty, including its relationship with human technology.
Nick Thran is a widely published writer of poetry and prose. His book of poems titled Earworm won the 2012 Trillium Book Award for Poetry. He will undertake two projects during his time at the A-frame: completing work on poems for his third manuscript, and an essay incorporating his experience at Roblin Lake and what it means to be a Canadian poet in today’s social and political environment. Nick lives in Montreal.
Kath MacLean, a writer and filmmaker living in Edmonton, spent a week with Al and Eurithe Purdy when they lived in Victoria, B.C., and looks forward to residing where Al did so much of his writing. She will be working on a collection of poems based on the actions, manners and etiquette of characters found in the Nancy Drew mystery series. And as a certified Ontario teacher, she proposes to involve local students in the project.
Laurie Graham plans to use her time at the A-frame to complete a series of poems about the North-West Resistance, tracking events involving the Cree, Métis and government forces in the spring of 1885. It is a time-consuming and research-heavy project supported by a 2012 Canada Council grant. Laurie, a native of Alberta, lives in Toronto and is assistant editor of Brick magazine. Her first collection of poetry, Rove, was published by Hagios Press in Fall 2013.
Rob Taylor is the author of The Other Side of Ourselves, a collection of poems published in 2011 by Cormorant Books. He is working on a master’s degree in creative writing at the University of British Columbia, and on a second collection of poems. Al Purdy’s writing has had a major influence on Rob’s style, and working at the A-frame will be like a homecoming for him. He plans outreach with the local community to promote and expand the writer-in-residence project.
Helen Guri is the author of Match, a collection of poems published by Coach House Books in 2011. Her poetry column on Random House of Canada’s Hazlitt website was nominated for a National Magazine Award in 2013. She plans to continue work on her second collection of poetry, tentatively titled Oracle, during her residency at the A-frame. Helen lives in Toronto.

About the Al Purdy A-frame Project:

So we built a house, my wife and I
our house at a backwater puddle of a lake
near Ameliasburg, Ont.
–Al Purdy “In Search of Owen Roblin”

And that A-frame house, made out of second-hand lumber and original poetry, became the most famous writer’s house in the country. Hundreds of writers and their housemates found their way to Roblin Lake to visit the Purdys and talk about poetry and history while downing beer or wild grape wine. Coleridge and his friends had their lake country, and now the Canadian poets would have theirs. A lot of poetry and prose came out of that hard-to-find place. 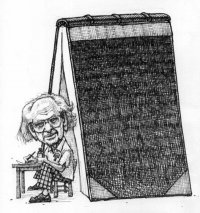 To prevent its second-hand wood from ending up on someone’s scrap heap, and with the blessing and support of Al’s widow, Eurithe Purdy, The Purdy A-frame Association raised funds to purchase the property and is now raising more funds to preserve it, create an endowment and establish a poet-in-residence program.