D.A. Lockhart, a resident this spring at the Al Purdy A-frame, has been shortlisted for the Raymond Souster Award, sponsored by the League of Canadian Poets (LCP). Lockhart’s Bearmen Descend Upon Gimli (Frontenac House, 2021) is a contemporary myth told in lyric form.

From the jurors: D.A. Lockhart’s cinematic novel-in-verse, Bearmen Descend Upon Gimli, features (Raymond) Northwind, our protagonist from the mighty shores 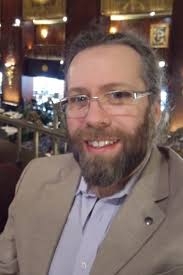 of Lake Winnipeg, who throws granite for the glory of Creator and ancestors to a soundtrack of Gordon Lightfoot and The Tragically Hip, and sweeps up double-double cups, snakes, the mastodons of colonialism, and the jokers that he left behind with plenty of humorous allusions to land it in the house. Lockhart hurries hard and wins the ends in this enjoyable and important allegory about Indigeneity and white supremacy, the human spirit faced with dubious odds, and nature’s home club advantage.

Lockhart is the author of multiple collections of poetry and short fiction. Other works include Go Down Odawa Way (Kegedonce Press, 2021) and Breaking Right: Stories (Porcupine’s Quill, 2021). His work has appeared widely throughout Turtle Island, including Best Canadian Poetry 2019, The Malahat Review, Grain, CV2, TriQuarterly, The Fiddlehead, ARC Poetry Magazine, and Belt. Along the way his work has garnered numerous Pushcart Prize nominations, National Magazine Award nominations, and Best of the Net nominations. He is a graduate of the Indiana University – Bloomington MFA in Creative Writing program where he held a Neal-Marshall Graduate Fellowship in Fiction. He is pùkuwànkoamimëns of the Moravian of the Thames First Nation. Lockhart currently resides at Waawiiyaatanong (commonly referred to as Windsor) and Pelee Island where he is the publisher at Urban Farmhouse Press and poetry editor at The Windsor Review.

The Raymond Souster Award was started in 2013 to honour Souster, an early founder of the League of Canadian Poets. The award is presented annually for a book of poetry by a League member published in the preceding year. The award carries a $2,000 prize, and is sponsored by the LCP. The winner will be announced on May 5.