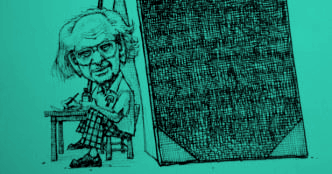 The Spirit of Al Purdy Returns to Ameliasburgh

On July 18, the heritage village of Ameliasbugh will honour the late poet Al Purdy by welcoming the public and hosting a series of events to complement the 3rd Annual Al Purdy Picnic, being held at the Purdy A-frame on beautiful Roblin Lake.

The picnic on Saturday is from noon to 4 p.m. and will feature readings and stories by well-known writers. Literary activities at the A-frame begin at 1:30 p.m., when host Robert Priest will share the stage with Adam Sol, Kevin Connolly, Paul Vermeersch and the current writer-in-residence, Laurie Graham. There will be a marketplace and door prizes. McClelland and Stewart and the Ontario Arts Council are supporting the event.

Box lunches, as well as a program and maps, will be available at the Town Hall from noon to 1:30 p.m. There will also be a book sale in the hall. At the Al Purdy gravesite in the nearby Grove Cemetery, a docent will be present from noon to 1:30 p.m. to share stories and answer questions about the poet and Roblin Mills. The Ameliasburgh Historical Museum and the Al Purdy Library will be open to the public from noon to 4 p.m. The library will be displaying Al’s Order of Canada medal, as well as work by local artists.

Parking is available at the Town Hall and the Purdy Library. Please note there is no parking on narrow Gibson Road, where the A-frame is located. There will be a shuttle bus running from the Town Hall to the A-frame and all the satellite events.

The A-frame was built on Roblin Lake in 1957 by the late Purdy, one of Canada’s greatest poets, and his wife, Eurithe. Thanks to the generosity of Eurithe Purdy and donors from across Canada, the A-frame was acquired in 2012 by the A-frame Association, a non-profit organization with a mandate to promote Canadian literature and to preserve the retreat for future generations of Canadian writers. This is the second year the A-frame has welcomed writers-in-residence.

The A-frame was the centre of Al Purdy’s writing universe and one of the most important crossroads on Canada’s literary map. In their 43 years residing there, Al and Eurithe hosted a who’s who of Canadian authors: Margaret Laurence, Milton Acorn, H.R. Percy, Lorna Crozier, George Bowering, Margaret Atwood, Michael Ondaatje and dozens of others.

The Al Purdy A-frame Association gratefully acknowledges the generosity of all donors to the project, as well as volunteers who helped in the restoration. They are crucial to the continued success of this effort. For a full list of donors, go to alpurdy.ca.