Al Purdy—The Voice of the Land 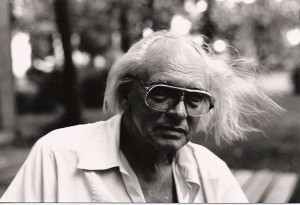 Raised in Trenton, ON, he dropped out of high school and rode the rails to Vancouver, where he began the life of an itinerant labourer. During WWII he served in the Canadian air force and lived in BC from 1942 to 1944; he also published his first book of poems, The Enchanted Echo, which he later pronounced “atrocious.” He served a long apprenticeship as a poet, finally breaking through with The Cariboo Horses (1965), which won the Governor General's Literary Award. From that time forward he was able to support himself full-time by writing. He and his wife Eurithe travelled widely while alternating their permanent residence between BC and Ontario.

Purdy published 33 books of poetry, along with a novel, A Splinter in the Heart (1990); an autobiography, Reaching for the Beaufort Sea (1993); and nine collections of essays and correspondence. His Collected Poems (1986) won a second Governor General’s Award. Other collections include Poems for All the Annettes (1962), North of Summer: Poems from Baffin Island (1967), Wild Grape Wine (1968), Sex & Death (1973), Sundance at Dusk (1976), The Stone Bird (1981), Piling Blood (1984), The Woman on the Shore (1990), Naked With Summer in Your Mouth (1994), Rooms for Rent in the Outer Planets: Selected Poems (1996), To Paris Never Again (1997) and a second book of collected poems, Beyond Remembering: Collected Poems of Al Purdy (2000). He was appointed to the Order of Canada in 1983 and the Order of Ontario in 1987. A strong nationalist, he achieved greatness in a way different – and perhaps more fittingly Canadian – than any other writer before him. It came not from great learning or heightened sensitivity or stylized rhetoric, but rather by giving voice to the vernacular idiom of ordinary Canadians.

Although he cherished the idea of being a writer from age 13, Purdy had little formal education and travelled from coast to coast working at odd jobs until he was in his forties, which gave him a worm’s-eye view of Canadian reality that he never lost. Not only did he write naturally and unaffectedly in the language of the mattress-factory lunch room, he also wrote about its subjects: hating the boss, savouring a game of hockey, brewing homemade beer, parting with a beloved old car, rowing with a spouse. This was a highly original choice in a profession where linguistic artifice and intellectual refinement are the norm, but what makes Purdy's best work great is that it shows the language of ordinary life to have resources of humour, intellect and lyricism fully as rich as those of more formal writing. This was an innovation not only of national but of worldwide significance, and Purdy has been justly honoured for it.

In the years since Purdy’s death, his poetry keeps growing in stature as evidenced by the academic papers and conferences, books, translations, movies, internet fan pages and blogs about his work, and his influence on other writers. Gordon Pinsent and Gord Downie have portrayed him on film. On Tuesday, May 20, 2008, Toronto’s Poet Laureate Pier Giorgio Di Cicco and the City of Toronto unveiled the Al Purdy memorial statue in the east side of Toronto’s Queen’s Park. In October 2009, The Al Purdy A-Frame Anthology was published by Harbour Publishing.

At The Al Purdy Show in Toronto, Brian Johnson produced a short montage of Purdy. He got hooked. The result of several years of research, filming and interviews is the full-length documentary, Al Purdy Was Here, first screened in 2015. In 2018, the remarkable music from the documentary was released in full on the Al Purdy Songbook.

The 100th anniversary of Purdy's birth was marked by the publication of Beyond Forgetting.